Agencies can charge various types of fees when processing a FOIA request. Upon receiving a FOIA request, an agency will place the requester in one of three “fee categories” based on the or the nature of the requester, which will determine what kinds of fees can be assessed. Depending on the category, requesters may be charged search, duplication, and/or review fees. A requester will not be charged if they are granted a fee waiver. 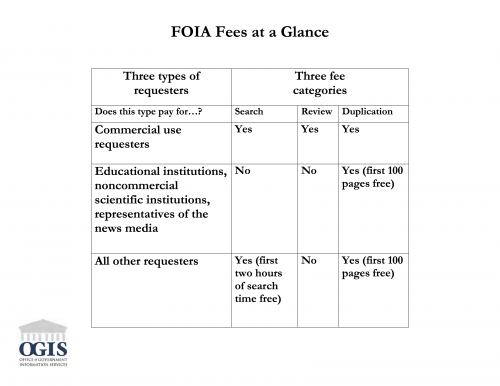 There are several types of fees that can be collected in response to a FOIA request. These include:

The types of fees that may be assessed for a particular request depend on the nature of the requester.

FOIA provides that “fees shall be limited to reasonable standard charges for document duplication when records are not sought for commercial use and the request is made by an educational or noncommercial scientific institution, whose purpose is scholarly or scientific research; or a representative of the news media;”[1]

Additionally, requesters in this category receive the first 100 pages of duplication for free.[2].

"Representative of the news media"

The definition of a "representative of the news media" is included within FOIA, although it has been given additional interpretations by courts. The statutory definition states that

the term “a representative of the news media” means any person or entity that gathers information of potential interest to a segment of the public, uses its editorial skills to turn the raw materials into a distinct work, and distributes that work to an audience. In this clause, the term “news” means information that is about current events or that would be of current interest to the public. Examples of news-media entities are television or radio stations broadcasting to the public at large and publishers of periodicals (but only if such entities qualify as disseminators of “news”) who make their products available for purchase by or subscription by or free distribution to the general public. These examples are not all-inclusive. Moreover, as methods of news delivery evolve (for example, the adoption of the electronic dissemination of newspapers through telecommunications services), such alternative media shall be considered to be news-media entities. A freelance journalist shall be regarded as working for a news-media entity if the journalist can demonstrate a solid basis for expecting publication through that entity, whether or not the journalist is actually employed by the entity. A publication contract would present a solid basis for such an expectation; the Government may also consider the past publication record of the requester in making such a determination.[3]

The scope of the news media category was significantly interpreted by the D.C. Circuit in Cause of Action v. FTC.[4]

Cause of Action v. FTC

Interpreting the 2007 Congressional amendments to the definition of a representative of the news media, the D.C. Circuit laid out the five elements of the criteria that a requester must satisfy in order to qualify as a representative of the news media.[5] It must: (1) gather information of potential interest (2) to a segment of the public; (3) use its editorial skills to turn the raw materials into a distinct work; and (4) distribute that work (5) to an audience.[6]

The court noted that these criteria apply only to the requester, not the nature of the materials that are requested. For example, the court said, a newspaper reporter “is a representative of the news media regardless of how much interest there is in the story for which he or she is requesting information.”[7] The court’s reasoning suggests that once an individual or organization has established itself as a representative of the news media it should almost always be accorded such status. In other words, if a requester satisfies the five criteria listed above “as a general matter, it does not matter whether any of the individual FOIA requests does so.”[8]

With regard to the third requirement — that the requester uses its editorial skills to turn the raw materials into a distinct work — the court noted that this can happen in several different ways that need not necessarily amount to a traditional news article. For example, the requester can issue a “substantive press release”[9] on the records it obtained. They can also provide editorial comment “to other outlets about documents it obtains under FOIA.”[10] In satisfying this requirement there is no need for the requester to use information from a range of sources. Indeed, the court noted that “nothing in principle prevents a journalist from producing ‘distinct work’ that is based exclusively on documents obtained through FOIA.”[11]

On the fourth and fifth requirements, the court offered some of its most expansive views on what constitutes distributing work to an audience in the digital age. For example, it held that “posting content to a public website can qualify as a means of distributing it — notwithstanding that readers have to affirmatively access the content, rather than have it delivered to their doorsteps or beamed into their homes unbidden.”[12] In other words, the meaning of "distribute" does not mean that a representative of the news media has to affirmatively push stories to their audience.

In terms of how big the audience has to be that accesses the information, the court simply stated that there must be an audience, but “beyond requiring that a person or entity have readers (or listeners or viewers), the statute does not specify what size the audience must be.”[13] Under the standard set out by the court, new organizations can qualify as a representative of the news media even if they don’t have an established track record of publication. Although a “bare statement of intent” to publish is not enough to get a media categorization, it is sufficient if the person or organization has “firm plans” to distribute the work to an audience.[14]

Students, as well as teachers in educational institutions, qualify for reduced fees under § 552 (a)(4)(A)(ii)(II).[15] According to the D.C. Circuit Court of Appeals, "Students who make FOIA requests to further their coursework or other school-sponsored activities are eligible for reduced fees under FOIA because students, like teachers, are part of an educational institution."[16]

Other requesters consist of all persons and entities that are not included in the other fee categorizations, such as people seeking information for personal use. Under this category, requesters may be assessed "reasonable standard charges for document search and duplication."[18] Review costs may not be charged.[18]

Fees set by statutes other than FOIA

The fee subsection of FOIA states that nothing in it "shall supersede fees chargeable under a statute specifically providing for setting the level of fees for particular types of records."[19]

FOIA provides that "No agency may require advance payment of any fee unless the requester has previously failed to pay fees in a timely fashion, or the agency has determined that the fee will exceed $250."[20]

Other limitations on fees

FOIA prohibits agencies from assessing as review costs “any costs incurred in resolving issues of law or policy that may be raised in the course of processing a request.”[21] Instead, review costs may only include “the direct costs incurred during the initial examination of a document for the purposes of determining whether the documents must be disclosed . . . and for the purposes of withholding any portions exempt from disclosure.”[22]

Effect of an agency's late response on fees

Generally, an agency's right to collect fees for processing records is limited if it does not comply with the statute's deadlines. FOIA states that

"an agency shall not assess any search fees (or in the case of a requester described under clause (ii)(II) of this subparagraph, duplication fees) under this subparagraph if the agency has failed to comply with any time limit under paragraph (6)."[23]

For example, where an agency did not make a determination on a requester’s fee waiver request within 20 working days — as well as his fee waiver appeal — as required under FOIA, the U.S. District Court for the District of Columbia held the agency was barred from charging the requester any fees.[24]

If "unusual circumstances" apply, and an agency provided proper notice to the requester, it has an additional 10 days to provide a determination; if the agency fails to comply with the extended time limit it may not assess any search fees (or for members of the news media and educational requesters, duplication fees).[26]

If "unusual circumstances" apply, and more than 5,000 pages are necessary to respond to the request, an agency may charge search fees (or in the case of a representative of the news media or educational requester, duplication fees) if the agency provides proper notice to the requester and the agency has discussed with the requester via written mail, electronic mail, or telephone (or made not less than 3 good-faith attempts to do so) how the requester could effectively limit the scope of the request.[27]

Finally, if a court determines that "exceptional circumstances exist", a failure to provide a timely determination is excused for the length of time provided by the court order.[28]

Under OMB’s regulations, the rate for employees’ time is the “the basic rate of pay for the employee plus 16 percent of that rate to cover benefits.”[30] OMB instructs that “[a]gencies should ensure that searching for material is done in the most efficient and least expensive manner so as to minimize costs for both the agency and the requester,” by — for example — “not engag[ing] in line-by-line search when merely duplicating an entire document would prove the less expensive and quicker method of complying with the request.”[31]

For duplication “prepared by computer,” OMB provides that “agencies shall charge the actual cost, including operator time, of production of the tape or printout,” while for “other methods of reproduction or duplication,” the fees should be “the actual direct costs of producing the document(s).”[32] The regulations also provide that “direct costs” should be assessed for “those expenditures which an agency actually incurs in searching for and duplicating . . . documents,” such as “the cost of operating duplicating machinery” and personnel costs, but not “overhead expenses such as costs of space.”[33]

A breakdown of costs can assist a requester in ensuring that the costs quoted meet the agency’s rate regulations. For example, in a case in the U.S. District Court for the District of Arizona, a requester argued that the “labor” costs quoted by an agency were “exaggerated” because they were inconsistent with the rate for “employee time” in OPM’s regulations.[34] However, the court explained that the agency’s stated “labor” cost reflected not only “employee time” costs, but also machine costs.[35] Therefore, if any costs seem unclear, a requester can seek clarification on how the agency calculated them.

If a requester believes an agency has improperly inflated fees in order to “effectively deny[] access” to the records, they must do more than merely put forth “bare allegations of impropriety.”[36] For example, a court held that a requester failed to support an allegation that an agency improperly inflated fees where the requester did not offer evidence or affidavits supporting this theory, whereas the agency submitted a breakdown and explanations of its calculations.[37] The court also noted that the agency had invited the requester “to reformulate its request to reduce the cost,” which “suggest[ed] agency cooperation, rather than obstruction.”[38] Therefore, in order to substantiate such allegations, the requester should first ask the agency for a breakdown of costs. This could help identify specific costs that appear to be inflated, allowing the requester to ask the agency to further explain it calculated them. It may also help to provide documentation demonstrating that the agency has previously assessed lower fees for similar requests.