This article is part of a series on Exemptions

Exemption 3 to the federal Freedom of Information Act allows the government to withhold records that are “specifically exempted from disclosure” by statutes other than FOIA.[1]

There are literally hundreds of “Exemption 3” statutes found in federal law.[2] While these statutes typically protect personal, defense, or contract information, they can also at times protect narrow, special interests.

See also Text of the FOIA

(3) specifically exempted from disclosure by statute (other than section 552b of this title), if that statute—

(i) requires that the matters be withheld from the public in such a manner as to leave no discretion on the issue; or
(ii) establishes particular criteria for withholding or refers to particular types of matters to be withheld; and

(B) if enacted after the date of enactment of the OPEN FOIA Act of 2009, specifically cites to this paragraph.

There are two ways in which a statute can qualify as an Exemption 3 statute. One, the statute “requires that the matters be withheld from the public in such a manner as to leave no discretion on the issue.” Two, the statute at issue “establishes particular criteria for withholding or refers to particular types of matters to be withheld.”[3]

In addition to satisfying one of those criteria, if the statute was enacted after the OPEN FOIA Act of 2009 – that is, after October 28, 2009 – it must specifically cite to FOIA Exemption 3 to qualify for the exemption.[4]

Finally, even if a statute qualifies as a Exemption 3 withholding statute, there is a question as to whether the requested materials fall within the scope of the statute.

Qualification of a "Statute" under Exemption 3

Is the Authority Cited a "Statute"?

As the U.S. Court of Appeals for the District of Columbia Circuit has stated, “Exemption 3 is explicitly confined to materials exempted from disclosure ‘by statute.’”[5] A “statute” for Exemption 3 purposes is a rule “affirmatively adopted by the legislature.”[6] For example, that court held that the Federal Rule of Civil Procedure 26(c) was not a “statute” under this definition because it was a rule issued by the U.S. Supreme Court.[7] While Congress had delegated the power to make such rules to the Supreme Court, and Congress could reject proposed rules, they had not been “affirmatively adopted by” Congress.[8]

The D.C. Circuit has also held that Federal Rule of Criminal Procedure 6(e), which prohibits the disclosure of a “matter occurring before the grand jury,” did meet the definition of “statute” for Exemption 3 purposes.[9] The U.S. Supreme Court had adopted certain amendments to the rules, and Congress then “voted to delay the effective date of several of the proposed rules, among them Rule 6(e), ‘until August 1, 1977, or until and to the extent approved by Act of Congress, whichever is earlier.’”[10]Then, by passing a statute, Congress “enacted a modified version of Rule 6(e) in substantially its present form.”[11] The Court held that Rule (6)(e) was therefore a statute, as it “was positively enacted by Congress.”[12]

Does the Statute "Require" Nondisclosure?

As noted above, there are two ways in which a statute may qualify as a basis for withholding records under Exemption 3. First, it can require withholding with no discretion, or second, it can establish particular criteria for withholding, or refer to particular types of matters to be withheld.[13].

Requires Withholding With No Discretion

In contrast, a court held that a statute did not meet this standard where it provided that certain information was to be held confidential “unless the head of such department or agency determines that the withholding thereof is contrary to the national interest.”[18]

The second basis on which a statute can qualify as an Exemption 3 statute is where it “establishes particular criteria for withholding or refers to particular types of matters to be withheld.”[19]

The U.S. Court of Appeals for the District of Columbia has clarified that a statute meets this criterion “only if” the statute “is the product of congressional appreciation of the dangers inherent in airing particular data and incorporates a formula whereby the administrator may determine precisely whether disclosure in any instance would pose the hazard that Congress foresaw.”[20]

As provided in the legislative history of Exemption 3, the Atomic Energy Act of 1954 is an example of a statute that “establishes particular criteria for withholding,” as it “provides explicitly for the protection of certain nuclear data.”[21] As one court explained, that statute “direct[s] that information be released only if it ‘can be published without undue risk to the common defense and security.’”[22]

In contrast, a court rejected an agency’s assertion that the Endangered Species Act was “a statute that establishes particular criteria for withholding particular matters.”[23] The law gave the Secretary of the Interior the authority to designate a habitat of a species as a “critical habitat” to “the maximum extent prudent and determinable,” as well as the discretion to “exclude any area” from such designation where it would be more beneficial to do so.[24] The Department of the Interior argued that since the statute provided “criteria for determining whether it would be ‘prudent,’ to include or withhold particular location information in the critical habitat designation,” it could be used as an Exemption 3 statute to withhold the locations of pygmy owls and their nests.[25] However, looking to “the plain language of the statute,” the court found that there was nothing in its text “that refers to withholding information.”[26] That is, to qualify as an Exemption 3 statute, it “must on its face exempt matters from disclosure.”[27] The agency in that case also argued that the legislative history of the Endangered Species Act showed “that Congress contemplated permitting the Secretary to withhold information in the critical habitat designation.”[28] However, the court rejected this argument as well, on the basis that the statute did not exempt matters from disclosure “on its face,” and “legislative history will not avail if the language of the statute itself does not explicitly deal with public disclosure.”[29]

A statute that an agency claims “refers to particular types of matters to be withheld,” must also be specific. For example, as noted by one court, the legislative history of the exemption indicates that a section of the Social Security Act that “purports to forbid disclosure ‘of any (tax) return . . . , or of any file, record, report or other paper, or any information . . ., except as (the agency) . . . may by regulations prescribe” would not meet this standard.[30]

Likewise, a court held that section 7(c) of the Export Administration Act of 1969 did not “refer[] to particular types of matters to be withheld” as it applied to “any and all ‘information obtained’ under any portion of” the Act.[31] The Act contained a number of provisions that authorized data collection — including one for records that were “necessary or appropriate to the enforcement of this Act . . . or to the imposition of any penalty, forfeiture, or liability” — and the court found that such “general applicability to anything that might happen to be encompassed within this array of information-gathering functions undermines any notion that Section 7(C) represents a congressional determination for any ‘particular type() of matter().”[32] That is, “the agency had the power radically to expand the quantity and diversity of information in its files to intercept matter of a sort that Congress well might not have contemplated when considering the need for confidentiality.”[33]

Scope of Statute in Relation to Requested Materials

Another question to consider when an Exemption 3 statute is cited is whether that statute actually applies to the requested materials.

At times, courts can interpret the scope of an Exemption 3 statute in a rather broad manner. For example, a court held that the CIA could withhold information about the legal fees it paid to private attorneys it had hired under two statutory provisions that it had previously held were Exemption 3 statutes.[36] A provision in the CIA Act addresses nondisclosure of the “organization, functions, names, official titles, salaries, or numbers of personnel employed by the Agency.”[37] The court ruled that this provision covered information about the agency’s legal fees, as it related to the “salaries . . . of personnel employed by the agency.”[38]

The court ruled that a provision in the National Security Act covered the information at issue as well, as the statute provides that “the Director of Central Intelligence shall be responsible for protecting intelligence sources and methods from unauthorized disclosure.”[39] The court held that the agency met its burden to show that “the amount of a legal fee could well prove useful for identifying a covert transaction.”[40] For example, the court noted, if the agency incurred “a large legal bill” in a covert operation, an intelligence analyst might be able to deduce the “size and nature of the operation.”[41]

In contrast, a court held that IRS “letter rulings” — documents that provided written advice to taxpayers interpreting tax laws and their application to specific fact scenarios — did not fall within the scope of an Exemption 3 statute that protects against disclosure of certain tax return information.[42]This statute bars the disclosure of “any income return, or any part thereof or source of income, profits, losses, or expenditures appearing in any income return.”[43] As the court noted, this statute protects “the privacy of taxpayers filing tax returns” and is “designed to prevent disclosure information contained either in the returns or in documents filed in conjunction therewith which enable the Secretary or his delegate to determine tax due the United States.”[44] 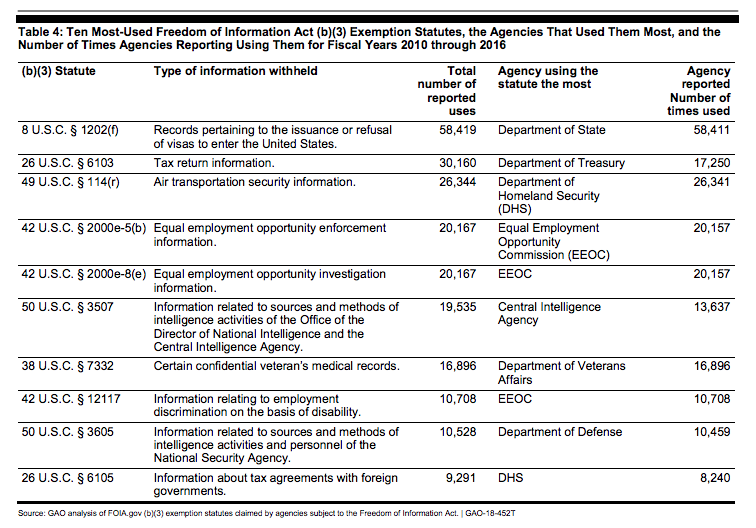 A representative sampling of the hundreds of statutes the government has used to withhold information under Exemption 3 is below. These examples are meant to provide guidance on the types of materials that the government protects under this exemption, not an exhaustive list. A more comprehensive list of statutes that have been used in conjunction with Exemption 3 is available at ProPublica's website. Another resource you may want to consult is the United States Department of Justice’s listing of all statutes that courts have found to qualify under Exemption 3.[47] However, you should note some limitations of the list. It does not include statutes that courts have ruled do not qualify as Exemption 3 statutes nor does it address statutes which have not yet been considered by a court for Exemption 3 status.

Examples of statutes that courts have held qualify for Exemption 3:

Examples of statutes that courts have held do not qualify for Exemption 3:

In its denial letter, the government should cite the specific statute it used to justify rejecting a FOIA request pursuant to Exemption 3.

There are two main ways to challenge a FOIA denial under Exemption 3. First, a requester can argue that the statute does not meet the criteria set forth in the language of Exemption 3, i.e., that the statute leaves some discretion on whether or not to withhold the materials and does not establish specific criteria for when to grant or deny requests. Additionally, statutes written after the OPEN FOIA Act of 2009, enacted on October 28, 2009 — in addition to meeting one of the two criteria — must also specifically cite to Exemption 3 to qualify for the exemption.[82] Also note that absent a ruling from the United States Supreme Court, there is always the possibility that a court not bound by a particular ruling of another court may not agree that a statute qualifies as an Exemption 3 statute. However, this is likely more important in the litigation stage rather than in the administrative appeals process, as the agency will likely continue to rely on the established, favorable ruling at the administrative stage.

A second way to challenge an Exemption 3 denial is to argue that the particular record is outside the scope of materials the statute protects.

You should note that discretionary disclosures are unlikely under this exemption, as Exemption 3 statutes often state that a record “shall not be disclosed.” Instead, where the statute is arguably a valid Exemption 3 statute, you should make a strong argument for why the record does not fall within the scope of records it covers.